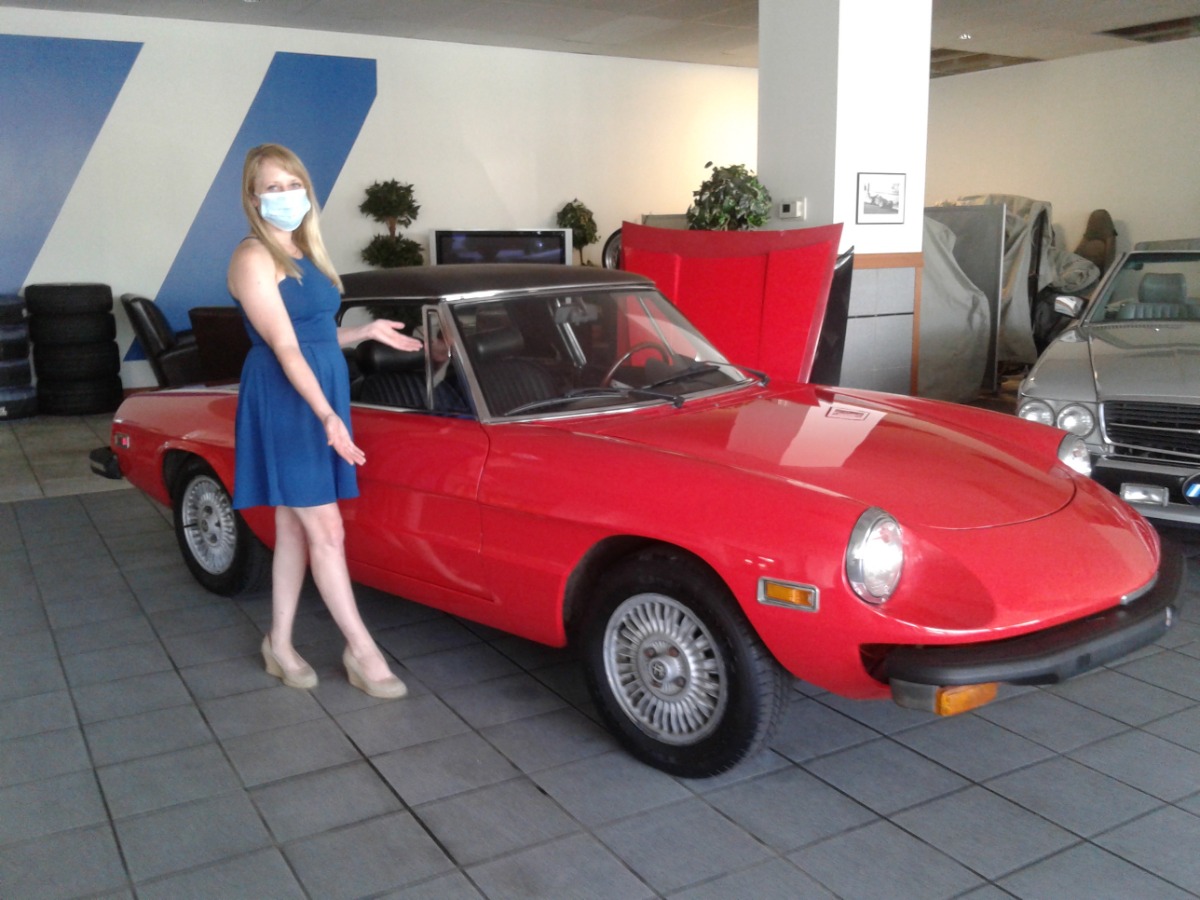 Â It is always difficult to price a special car like this-a 1979 Alfa Romeo Spider Veloce.Â  I'm looking at comparables from 2014 with nothing sold since 2018!. Youâ€™d think with Covid 19 the price of these collectible classics would be plummeting! But that is not the case and as one of my collector commented â€œThis is a buyers marketâ€. But finding a rare car in this condition means the sellers have the upper hand.

As an advisor to my sellers, I state (be ever so emotional) that this car will never be built again. It can be modified to an electric maybe. But it will never be quite like this. I get so excited when a young person (in my case anyone under 40) gets excited about a car as complicatedly simple as this.

Because of my lack of funds in college, Italian cars were unthinkable.Â  See advice below for Italian car owners. But it doesn't mean that I was always turning my head when something red and exotic flashed by. My generation will be among the last to have grown- up with the thrill, not just of driving free from adult repression and cell phone ringing, but just that pure sense of joy. That special joy that happens when you are out on the open road with a very cool car with the top down and the wind in your hair. It didn't matter that it was only 35 degrees out or snow was coming down. It was the challenge! Oh yesâ€¦try driving north Philly without a clutch or no wipers in a monsoon on Route 80 in NJ. This generation will never know what it is like! Rescue for them is only a cell phone button away.Â  Â

Â This 2 door- 2 seater convertible does not appear to have the problematic rust â€“ see â€œuglyâ€ photos. The engine was a 4-cyl. 1962cc/111hp Spica Mechanical Fuel Injection. Â  the standard Spider Veloce model, with a 2.0L (1,962 cc) DOHC 2 valves ( VVT) per cylinder 4 -cylinder engine made of Aluminum Alloy. Â Â This red with black interior has 74,058 miles on the odometer with a 4 speed manual transmission with the ubiquitous grind in each gear. The optional hardtop is in excellent condition. This car needs a tuneup and minor repairs â€“ see LAW #2 below. But most of all this car needs someone to love the challenge of bringing it back to its original course.

The 1950s vintage Alfa Romeo Giulietta and Giulia series of coupes and convertibles seemed like they could conceivably go on forever. Even as late as 1965, Road & Track was still singing the praises of the 1600cc Giulia Spider Veloce. Nevertheless, for the 1966 model year, Alfa began selling its replacement, named the â€œDuetto,â€ via a contest that Alfa ran with the Italian public. It was the last project in which Batista Pininfarina was personally involved. And while widely viewed as classic design today, it was met with some controversy when new. Power was initially from the familiar Alfa 1600cc twin-cam engine that powered the last Giulias. Emission laws affected Alfa particularly hard and 1968 was a lost year in the U.S. The car returned for 1969 with a 1750cc engine and SPICA mechanical fuel injection. 1970 was another lost year and 1971 saw the car return with its lovely boat tail chopped off. The so-called Kamm-tail spider continued on basically unchanged (save for bigger bumpers and a 250cc boost in displacement) until 1982 when electronic injection was introduced and in 1983 styling was freshened slightly. Interior changes were about it until 1991 when the final (and quite successful) cleanup of the design took place prior to its discontinuation in 1994. All Spiders are brisk performers with sub-10 second 0-60 times and stellar convertible tops. Parts are readily available and while they are more complex and donâ€™t tolerate â€œfools with toolsâ€ as readily as an MGB, they are more rewarding to drive. Hagerty

Â Â  The Alfa Romeo Badge has some conflicting discussion about its origins. Look closely, you will see a serpent eating a man? A child? â€œThe most interesting legend states that in Lake Gerundo, very near Milan, an enormous snake lived and terrorized the inhabitants of the city by attacking and eating the children and polluting the water with its venom. In a heroic effort, Ottone Visconti, the founder of the family, slayed the snake and adorned his coat of arms with its likeness as a symbol of triumph.

While this is a highly unlikely legend, not to mention a grim one, it serves to add to the aura around one of the world's most storied and historic brands. A little imagination never hurt anyone - unless, of course, you happened to be a child during the era of terror from the giant snake.â€ Wikipedia

Manufactured from 1966 to 1994, the Spider remained in production for almost 30 years. The Italian firm of Pininfarina designed and manufactured the body, as well as final assembly. This Third generation/ Series 3 Spider was introduced in 1982 and was the last project in which founder Battista Pinifarina was involved. The Spider was first launched at the 36th Geneva Motor Show in March 1966

For the North American market, a model marketed the Graduate, which first appeared in 1985 in North America and until 1990, acknowledged the model's appearance in the 1967 film, THE GRADUATE, starring Dustin Hoffman and Anne Bancroft.( An older woman seduces her daughters younger boyfriend). The car is being sold â€œas isâ€ and may be part of the character of this iconic sports car.Â We welcome trades and can arrange financing. Â Please call Suzanne for more info and photos. Suzanne will be happy to arrange a Zoom showing or arrange a test drive.302-545-3489 text available. Presented by Bavarian Motorsport

It should be criminal and a sacrilege to not drive and enjoy a car as it should be and the Alfa Romeo is no exceptionÂ DRIVEN TO BE DIFFERENT!Â â€œAlfa's are so temperamental they even sometimes donâ€™t want to leave the garage when it rains. One ought to consult the Alfa Bulletin Board (www.ALFABB.com) for the SEVEN laws of Italian (i.e. Alfa) car manufacture to know the whole storyâ€. I could only findÂ The Six Laws of Italian Sports CarsÂ â€“ see below.

As the owner of an Italian vehicle, you have undoubtedly found that, from time to time, the thing defies all known laws of Physics. Distinguished researchers from all over the world have spent entire lives trying to understand such phenomena. Recently, the Six Laws of Italian Sports Cars were discovered, thus reducing most ownersâ€™ dependency on sorcerers and prayer to keep such cars running. Careless application of these laws to any individual car may fix the problems of the moment, but cause hives or allergies in said owners.

1) THE LAW OF PLEASING DESIGN WHERE IT REALLY DOESNâ€™T MATTER
â€œThe inside of cam covers or other relatively innocuous areas, shall be laced with buttresses, cross-bracing and all manner of esoteric stiffness-with-lightness design, while something like connecting rods shall self-destruct at redline plus 1 rpm due to a basic lack of strength.â€ An example of this Law is the stunningly beautiful Lamborghini or Ferrari V12s of the late 1960s. They were famous for wearing out all four camshafts in 10,000 miles or less. The camâ€™s metal appeared to be recycled coathangers, which coincidentally are still in short supply in Italy.

2) THE LAW OF NON-FUNCTIONAL APPARATUS
â€œAll Italian Sports Cars, regardless of age, shall have at least one system or component which does not work, and cannot be repaired. Such a part shall never be mentioned in the Official Shop Manual, although there may be an out-of-focus picture shown.â€ It goes without saying that such parts should never under any circumstances be removed, lest the natural balance of the car be upset.

3) THE LAW OF ELECTRICAL CHAOS
â€œAll Italian Sports Cars shall be wired at the Factory by a cross-eyed, colour-blind worker, using whatever supplies are within reach. All wires shall change colour-code at least once between energy source and component. All grounds shall be partially insulated.â€ This tends to guarantee that the owner of such vehicles will eventually be intimately familiar with its electrical system, since he will need to trace out each wire, then rewrite his Official Schematic, which will differ from all others in at least one area.

4) THE LAW OF PERSONAL ABUSE
â€œThe more an Italian car breaks down, the more endearing it becomes to its increasingly irrational owner.â€ For example, you purchase an Italian Sports car, for all the money you ever hoped to earn, and receive a ticket for air pollution on the way home from the dealer due to the vast clouds of smoke that follow you. Several return trips to said dealer, accompanied by your rapidly dwindling cash reserves, cures the smoking. But now, the engine sounds like a food processor full of ball-bearings. After replacing every component in the car, including the radio speakers, the noise vanishes and is replaced by an odor reminiscent of a major fire in a goat-hair mattress factory. You still keep trying, God help you.

5) THE LAW OF UNAVAILABLE PARTS
â€œAll parts of an Italian sports car shall be made of a material that is available in inverse proportion to its operating half-life.â€ Thus, the speedometer hold-down screws are made of grade 8 cold rolled steel, while the valves are of fabricated Unobtanium, made only at midnight by an old man with a pointy hat covered with moons and stars. Such parts will be backordered during the design phase of the car, and will remain so forever. Bribes, pleading and threats will be ignored.

6) THE LAW OF CRYPTIC INSTRUCTIONS
â€œAny official publications dealing with repair, maintenance or operations of an Italian sports car shall be written such that every fourth word is incomprehensible to the average owner. In the event that a random sentence is understandable, the information contained therein shall be wrong.â€ ThisÂ 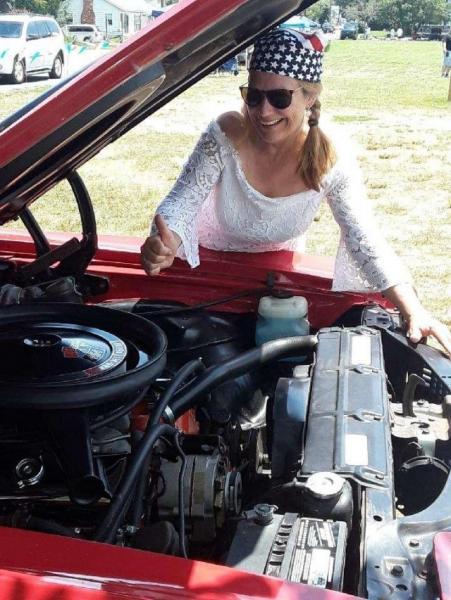 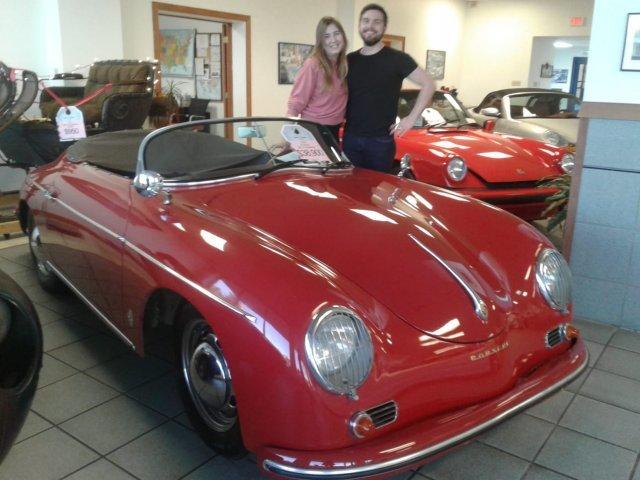 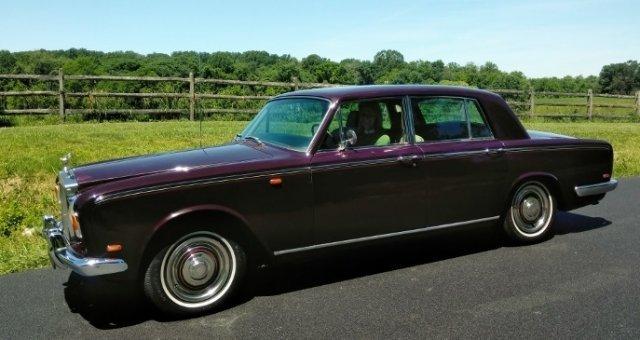 Tax, tag and title fees are not included in advertised price.

All pricing and details are believed to be accurate, but we do not warrant or guarantee such accuracy. Vehicle information is based off standard equipment and may vary from vehicle to vehicle. Call or email for complete vehicle specific information